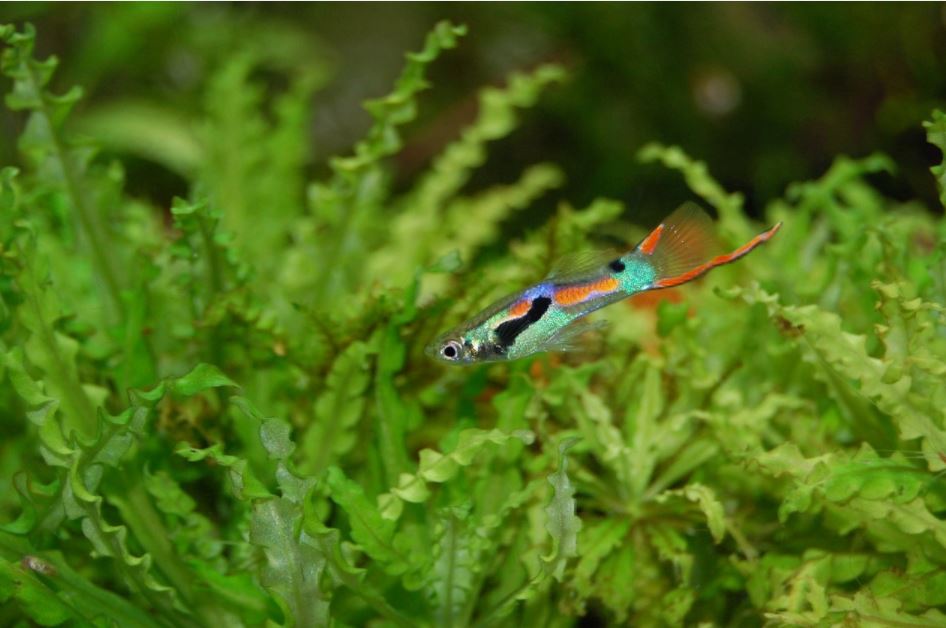 Neon tetras are sparkling and attractive small freshwater fish most people love to watch in an aquarium. Their tummies are colored silver and white while their backs are light blue. Because of their size, they prefer to be with their kind. As they are relatively small as compared to other fish in your aquarium, it’s safe enough to own as many of them. Neon tetras go for fish flakes, blood worms, and brine shrimp. They can last up to five years when kept in an aquarium.

Like neon tetras, danios are small and lives up to five years. These hard-freshwater fish are also suitable for an aquarium as they are small and are not vulnerable to varied water conditions. They would also prefer a place with less current.

Danios are beautiful to look at, especially the Zebra Danio, also known as the “Zebra Fish.” As their name suggests, they resemble zebras with their striped and colored patterns covering their bodies. They come in different color combinations and classifications.  This type of fish can grow up to a maximum of 4 inches (Giant Danio) and are content with fish flakes for their diet. Generally, they opt to swim in a large group.

Another attractive kind of freshwater fish is platies. Like danios, platies come in different varieties and can be distinguished by their colors. Aside from their beautiful colors, platies are also the hardy type of freshwater fish and act more passively than the others. For a novice, platies are not a problem regarding maintenance. They are not choosy in their diet and will go for any type of food from flakes to frozen live foods.

In as much as tropical fishes can be more attractive to look at than other fishes, another suggestion to consider for your aquarium are Guppies.  They are hardy and colorful fish also popularly known as “rainbow fish” or “million fish.” Their diet can be as simple as all the other tropical fishes. They can take a regular diet of fish flakes, frozen or even live brine shrimp, blood worms or Daphnia. They are not so hard to please as they can even go for more than a week without food.

Guppies are breeders. As a beginner, you must know how to separate male guppies from the females, unless you are into breeding them. Otherwise, you might end up filling your aquarium to the disappointment of other occupants.

A Kuhli Loach looks like an eel, but it isn’t eel; it’s a fish that is one of the best freshwater fish there is. It is slender like a small snake and is highly adaptable to any water situation. The Kuhli Loach is not picky when it comes to their diet as they would eat anything that is being dropped in the tank. As it dwells in the bottom, it finds its food from the bottom of the aquarium. Thus, we suggest to feed them with fish pellets or any live food for that matter, like shrimps and worms.

The Kuhli Loach is a nocturnal fish that is why it behaves peacefully. A few companions are enough for them, like two or three at any one time as they are not schooling fish.  In as much as they are elongated, they can be mistaken as worms thus there may be some bigger species in your tank that might view them as their food.

Another attractive type of a tropical freshwater fish is the Cherry Barb. Cherry Barbs can be adaptable to any water conditions like the Kuhli Loach. Small (about two inches long) and colorful they are active once they familiarized themselves with their environment. They are schooling fish and would love to be with many of their kind. We suggest you have more than six at least to keep them happy. Cherry Barbs are also one of those friendly types of freshwater fish, and they feel comfortable with any kind of companion in their surroundings.

Cherry Barbs are also a small type of a fish and have a slender body. They are usually timid so to make them feel secure, it is recommended that they should be with the same fish of the same nature. You should also install some wild plants in the aquarium so they would have somewhere to hide. Although they eat any form of fish food, sometimes, they can be more cautious in eating the food given to them, and it takes time before they eat comfortably.  One to two weeks will do.

Cherry Barbs can even go for veggies as well as meaty food. Flaked, live and frozen food does not matter for a cherry barb. Once they have been paired, you can feed its fry with newly hatched brine shrimp until it can swallow flake food.

If you’re in for something red, why not try the Fire Mouth Cichlid.

The Fire Mouth Cichlid changes its scales turn into the red during spawning time.  They are a friendly type of fish, but at times they can also become territorial during breeding season.  They can be combined with other species in your tank yet it is best to provide them something to hide into like an overturned pot or a PVC pipe where they can keep their eggs peacefully nestled and secured. When they become older, they can grow as long as six inches.

Feeding them is not much of a problem as they are not too selective or demanding. Cichlids eat almost all kinds of fish food. From pellets, sticks, to live and frozen foods, the Fire mouth Cichlid eats a lot of these with passion. That sort of fish foods is generally inexpensive and can be bought at any pet store. This is why we find it a very practical idea to keep a Fire Mouth Cichlid when you are a newbie in fish keeping.

Pearl Gourami, also known as Lace Gourami or Leen Gourami, is also a good choice for a beginner’s aquarium. The Pearl Gourami is a beautiful and hardy fish that can easily be raised in tanks as they do not require much space for them to catch air.  The Pearl Gourami has small pearl shaped dots all over its body with a black bar horizontally situated all over its length. The male gourami usually develops red chest and has longer dorsal fins than females.

The Pearl Gourami eats a range of different food whether plant-based, meat-based or a combination of both. They usually would prefer flake foods coming from algae, and also will go for live foods like bloodworms, brine shrimps, and tubifex.

Like the Cichlids, they also look for places to snuggle and make themselves comfortable and would not opt to live with aggressive fish types. Largely, these fish are not hard to breed.

The Tiger Pleco is also one of the best freshwater fishes we can recommend. With its peaceful nature, they would rather spend more time at the bottom than stay afloat on top of the tank. This is why they would prefer sinking foods although they also would love to eat brine shrimps and worms. However, they would also go for plants especially if they go hungry.

In as much as they are territorial, your Tiger Pleco can find their place in the aquarium with rocks and wood.

They can grow as long as 5 inches with a maximum lifespan of 8 years under ideal conditions you could provide them.

The longest living fish in our suggested list would be the Cory Catfish as it could live for as long as twenty years. Aside from that, there are more than 140 species that can be associated with its kind.

Generally, they are herbivores, so they prefer to eat vegetative plants and algae. Because of this, keeping your aquarium clean would not be a problem at all with the Cory Catfish around. When in isolated places, the Cory Catfish thrives on almost anything like insects and larvae, or any vegetative matter on the bottom of shallow waters. Of course, like a fish keeper, you can give them flakes, larvae, and worms.

Cory Catfish prefer to be with a group. Having three of them for a start isn’t a bad idea as they can stay with you longer up to twenty years max.

If you go for freshwater fish that are adaptable to different types of water aquariums, go for Mollies since they stay alive in freshwater and saltwater situations. Changing water types for them have to be done gradually though.

Mollies are one of your typical hard fish, and they can come in different sizes and colors. A word of caution, however, always check the right water condition for your type of mollies. Most of them prefer to be in warm water, so make sure that the water temperature in your tank is within the range of 25 and 28 degrees to play it safe.

Like other fish types mentioned, mollies prefer a plant diet as it is easy to digest. Algae then would be best for them along with vegetarian flakes while occasionally giving them bloodworms and brine shrimps; perhaps once or twice a week the most.

We also recommend the swordtail or swordtails. This type of fish is pretty much sought after by most fish keepers.

Swordtails can be found in minor streams and prefer to eat foods that are plant-based. Like mollies, swordtails would love to clean a tank with occurring natural algae like vegetable flakes. However, swordtails would also go for live foods every now and then.

Swordtails can grow as long as 12 centimeters and adapts well to any water temperature. They prefer to swim in groups, for a start having five or more would be best for your aquarium; the ideal would be to keep the temperature of your aquarium between 25 to 28 degrees Celsius, although this is not absolute as they can also thrive in cooler or warmer aquariums.

Also known as Siamese fighting fish, the Betta fish is an aggressive type of fish but only towards other Betta fish. It is also a popular choice for fish lovers, as their appearance is spectacular because of their colorful fins.

Coming from the Gourami family, the Betta fish is also easy to look after as they are not picky when it comes to food. They eat almost all types of fish food such as fish flakes, blood worms, brine shrimps and live food for a treat.

Bettas live harmoniously with non-grabbing or nipping fish as they could easily be targeted due to their enormous fins.

How Do I Grow My Aquairum Fish Fast and Quickly?

How to Choose the Best Freshwater Fish for your Aquarium

why i made this site

Hi, my name is Jim Furbough, and I'm a long time fish tank enthusiast. About 5 years ago I discovered coffee table fish tanks, so I set out to build them myself, and for friends and family. Now I've decided to make this blog, to help people create or buy their perfect fish tank tables!

My blog is part of the Amazon affiliate exchange program - I stand to receive commissions for any sales generated via my blog. Thanks! :)
Close Menu